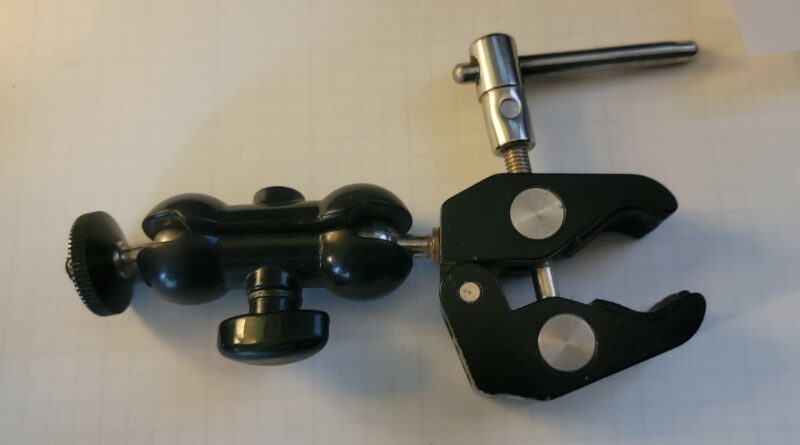 This little clamp mount is very versatile, really handy, and is generally really well built. Being mostly metal, its surprisingly heavy (and heavy duty) and has the appearance of being very secure. The clamp is a great size – able to clamp on to all manner of things. It is really very versatile and handy to have in my camera go-bag.

The major flaw is at the threaded ball that attaches to the main clamp – it does not stay threaded on. It appears that the manufacturer used some type of threadlocker to hold it on (see photo), but this did not work for me. I have tried several methods to tighten the ball mount into the clamp assembly (carefully, without damaging the surface of the ball) but it does not hold over time. I’ll hit a bump while skiing or riding my bike and my camera flops over due to the threaded screw post un-threading.

In my latest attempt at a fix, I have purchased some of my own threadlocker compound and applied it to the mount. We’ll see if this improves things.

I really want to like this mount – it has a lot of nice features, strength, and versatility. But with the main mounting post not wanting to stay tight and attached, it really decreases this mounts overall value. However, at a price of around $15 (at the time of writing) a little setback is probably not the end of the world. Would I buy another one (or several) of these? Yes – but I would purchase some red (permanent) thread locker at the same time.

This site uses Akismet to reduce spam. Learn how your comment data is processed.

Looking for the Adventure Blog?

Don't worry, its still around - just where it's always been over at PointsUnknown.COM